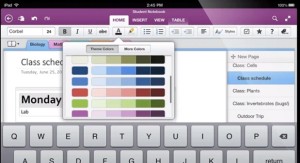 OneNote NoteBook on a student’s iPad

Along with all the great eLearning stories that happen within the classrooms at St Andrew’s College, this blog does also try to cover the occasional product release or update that is pertinent to our students and parents.

This week saw a significant update to the free OneNote iPad app from Microsoft, with two new features introduced:

Regular readers of this blog will know that the College has invested significantly into teachers using the Surface Pro 3 tablets (around 25 teachers now have one as their primary device), and 2015 has seen quite a few students bringing a Pro3 to class each day too. Whilst we do run a fleet of iPads in the Junior Department managed by JAMF’s Casper Suite, the lack of handwriting or drawing within the free OneNote app on an iPad has always been a significant drawback.

I decided to create a quick video highlighting the handwriting feature of OneNote for iPads, and included the necessary steps to connect with the College’s Office365 account (all OneNote NoteBooks on an iPad must be stored in OneDrive or Sharepoint Online – they can not be stored locally on the iPad only).

The other new feature that is bound to be prove helpful to students is the OCR functionality – in Microsoft’s release notes they say:

With today’s update, text within any image inserted into a notebook saved on OneDrive will be searchable in OneNote on all PCs, phones and tablets, as well as OneNote Online. Once added, the OneNote service will process it and it will start showing up in search results typically within a few minutes. 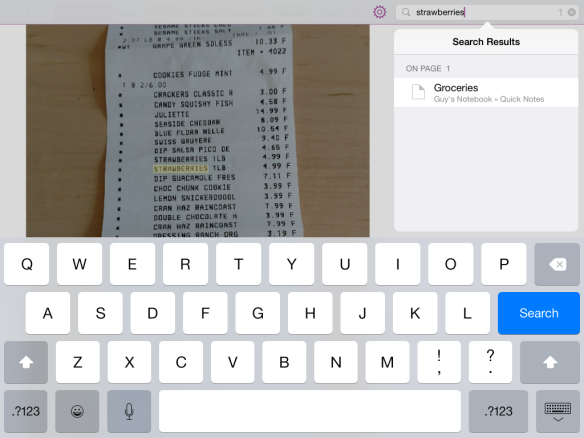 Searching text within an image inserted into OneNote on an iPad

It is primarily in our Preparatory School that we have seen lots of iPads being used by students and with this update I am sure there will be a re-examination of their usefulness in the classroom, given the tight integration into Office365.

2 thoughts on “Microsoft Brings Handwriting to OneNote For iPad”