This post was originally published in the School News Issue 27 in Term 4 2014. A more detailed look at the use of eBooks at St Andrew’s is available here 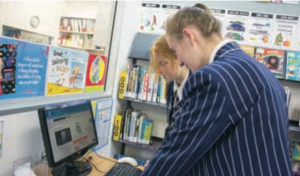 St Andrew’s College in Christchurch had Softlink’s Oliver v5 library management system installed in July 2013. A private, co-educational school, St Andrew’s has 1300 students on the roll – 400 in the preparatory school, years 1-8, and 900 in the secondary school, years 9-13. The school had previously used Oliver v3 for about three years, and before that, Alice. The latest version is a complete knowledge, content and library management tool for schools, which provides everything a modern library needs to function effi ciently. It manages all the day-to-day operations of the library – the circulation of books, cataloguing, automatic emailing, stock-taking and more. Training on how to use Oliver v5 was provided by the company’s New Zealand business account manager Lyn Walker.

“We upgraded to the new version for a number of reasons, primarily because it is web-based,” the college’s library manager Cathy Kennedy says, “but the main driver was the system’s ability to integrate ebooks into the catalogue. That’s the recent big innovation, whereby our digital library can fully integrate into the catalogue, and users can borrow directly through Oliver and read the e-books on any device.

“The public interface allows users to search the library catalogue from any device,” Mrs Kennedy says.

“They have the ability to access the catalogue from anywhere at any time. Users can also access the library with an app on their smartphone or tablet. Having that 24/7 access to resources is a huge advantage.”

Those resources are not necessarily traditional books or ebooks. They also include video fi les, images, and all forms of research material. “By logging into the home page on the library site students have immediate access at any time to a one-stop-shop with a vast collection of reading and research material,” Mrs Kennedy says“The home page that the Oliver system allows us to build is a launch pad, a window to a world of information. It includes links to other internet sites, including good New Zealand websites. We also post library news on the home page, and put up photos of events like Book Week. Book trailers can also be made available for students to view.”

I took the opportunity in the last week of Term 2 to sit down with Cathy Kennedy, the Library Manager at St Andrew’s College, and discuss the implementation of eBooks in the College libraries. Having personally used various eBook readers, from Kindles to iPads, I was keen to learn more about the journey to arrive at the current solution in place.

Due to the length of this post you may want to skip down to the various sections below which include:

Since around 2010 Cathy had been closely watching the development of eBooks and was always keen to introduce them to the students here at St Andrew’s, however it was not until OverDrive came to Australasia and offered a package targeted at schools that it became truly viable. Prior to this, there had been other vendors but they were too expensive and their solutions were still really in their infancy and not easy to implement. OverDrive was an obvious choice because:

After enquiring about other schools in Christchurch that might be interested in setting up a consortium and sharing eBook collections, Cathy found there were no equivalent Year 1-13 schools keen to partner and so she decided to go it alone in Term 3, 2013.

Deciding on a “soft launch” first, the new eBook library was introduced to staff only in Term 4, 2013, before students were given access to the full collection in Term 1, 2014. Now six months on, Cathy is satisfied with the decision to go it alone and not partner with another school, as it has allowed her greater control over the selection of titles in the growing library. Interestingly, she did comment that:

For smaller schools, the appeal of a consortium must be very high, as the price of entry into eBooks is not cheap. To be able to quickly grow your catalogue with another school would make it significantly more affordable.

A shot of the interface used by the Library to help identify potential new eBook Purchases.

One of the biggest drawcards for using OverDrive is the wide range of publishers that are supported, allowing the library to select from a massive number of titles. The pricing model is based on an annual subscription, half of which covers the support of the platform itself, and the other half is credit towards eBook purchases for that year. I thought this was a rather smart “hook” by OverDrive to guarantee a minimum number of eBook purchases by schools each year, whilst it does meant that the students benefit from a continual supply of new titles.

To assist with the selection of new titles, the interface used by the Librarians shows a “Top 200” titles in various categories that we currently do not own (see screenshot on the right). From this, it’s easy to sort through Young Adult, Fiction, Audiobooks etc to locate popular titles that could be added the collection.

Additionally, OverDrive eBooks can be read on most common eBook readers including iPads and Nooks, with the major omission currently being the Amazon Kindle. This is being supported in the Northern Hemisphere and Cathy is hopeful that support for the Kindle may be available in 2015. Student laptops can also be used to read eBooks on as well.

As mentioned earlier, the integration with Oliver was crucial as this makes it easy for students to find any title, printed or electronic, from the one platform. An upgrade is planned to support “ezread” which will allow students to borrow eBooks directly from Oliver, without the need to be redirected to OverDrive.

Furthermore, both Oliver and OverDrive support Single Sign On (SSO), allowing students to use their existing username and password to authenticate to the systems to borrow books. This allows us to restrict younger students from accessing content intended for senior students, as our students are grouped by Year Level.

This level of integration is becoming an increasing requirement for third party products that we look to deploy into the College, as it allows for centralised management of student data and avoids issues of students forgetting their passwords and being dependent on a third party to reset and provide to them.

One of the biggest challenges being experienced is the need to continue to provide new titles in both formats: paper and eBook. Students and staff have not yet fully accepted that a title may only be available in one format or the other, meaning that new titles are effectively being purchased twice. Cathy’s end goal is very clear however: for borrowers to be comfortable reading a title in either format, meaning she only needs to purchase it in one format or the other. END_OF_DOCUMENT_TOKEN_TO_BE_REPLACED