Two concepts come to mind when contemplating Technology and its significance within education. Firstly, once hailed as the Holy Grail for its innovation within the communication field, Technological innovation increasingly holds the auspicious role of ‘global saviour’ when engineered by socially conscious citizens. Experts argue that we are now living in the age of the Anthropocene – the proposed epoch when humanity has irrevocably altered the planet’s geology and ecosystems. Can the youth of today, who will live in a world where the ‘internet of things’, ‘bio- wearables’ and ‘blockchain’ technology are the norm, turn our influence around and steer our global impact in a new direction towards a more sustainable future aided by innovative technology?

Secondly, technology (characterised by exponential growth) surely needs to be influenced by socially conscious citizens as eluded to above. For example, exponential growth of internet technology may be tempered by our socially aware youth favouring net neutrality. Equally so, it appears that technology is forcing companies to be better global citizens. “In the age of internet transparency, it seems corporates no longer have anywhere to hide – a spot of corporate social responsibility (CSR) whitewashing is not going to cut it anymore” (Lawson, 2016).

At St Andrew’s College we are aiming for continuous improvement as far as opportunities for ‘technology enablement’ and development of ‘computational thinking’ are concerned. Well-supported by our Technology Department’s academic expertise and our ICT Division (headed by Director, Sam McNeill, and e- Learning Integrator, Tom Adams) the additional support we offer GATE students includes: Coding Club, Neuroscience Learning Module with participation in the Australasian Brain Bee Competition for Year 11 students, Forensic Science and Astrophysics Learning Modules, Passion Projects where students have the opportunity to complete coding-based projects, online participation in the New Zealand Diplomacy Competition, attendance at University of Canterbury public lectures, such as the recent Black Hole lecture, meetings with University of Canterbury lecturers and access to technology-based opportunities and events such as the recent Singularity University workshop.

Future strategies for 2017 include: offering Geographic Information Systems modules as part of the Year 9 and 10 Academic Extension and Enrichment (ACEE) Programmes, development of the Coding Club supported by Tech tutors drawn from industry, introduction of a comprehensive robotics programme to bridge our Preparatory School’s excellent programme, facilitation and guidance for students wishing to apply for the NASA Space School, potential visits to Auckland’s Stardome Observatory and/or the Mt John Observatory, online tech learning opportunities such as edX and Coursera [the top specialisations in Coursera are all technology-based], facilitation of Orion’s Evolocity Competition, and the establishment of further connections with Christchurch’s Innovation Precinct as part of the Christchurch Tech Sector Strategy [2015-2025]. In addition we will continue to punctuate our GATE calendar with further ‘SMAC’ opportunities for intellectual growth and sharing of minds such as expanding the classroom via e-meetings.

The St Andrew’s College Secondary School GATE programme has integrated Technology as a learning area with Philosophy, Sustainability and increasingly, Global Citizenship. The Global Citizenship learning area finds its application in attending Model United Nations and Model European Union Conferences, and Future Problem Solving. This, we believe, is critical as far as promoting engagement with global issues and perspectives and an ethical relationship to difference, addressing complexity and power relations. 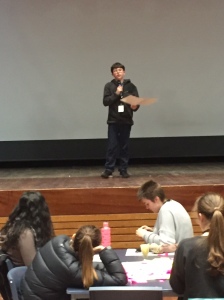 As a further provision for our learners we intend to engage with the New Zealand Centre for Global Studies (NZCGS) and its Global Citizenship Outreach Programme. The objective of the NZCGS is to explore ways in which global problems faced by humanity in the 21st CE may be most effectively addressed and resolved. Thematic areas of focus include sustainability, peace and security, human rights and international law & organisations.

The Singularity University would argue that our youngest generation, coined the exponential generation, is well equipped to change the world as we know it. They have been born into the fastest period of technological and socio-cultural development in history, possessing the tools, connections and resources that will propel humanity forward and positively impact on the lives of others (SU, 2016). St Andrew’s College students attended the Singularity University student workshop “Find Your Billion” over the September term break. They worked in diverse groups throughout the day to take action in the present to shape our future. Already socially conscious individuals, this workshop further stimulated the students’ drive to become critical global citizens based on the assumption that all knowledge is partial and incomplete hence the need to engage with other perspectives to learn and transform our views, identities and relationships.

Furthermore, STEM Education has focused schools’ learning programmes on the Sciences, Technology, Engineering and Maths. After school, or extracurricular programmes, are increasingly recognised as playing a valuable role in improving STEM education. As aforementioned, from 2017, St Andrew’s Coding Club will be supported by the Technology community as an extracurricular activity.

Coding is now mandatory learning in the United Kingdom. In September, 2014, the UK actioned their attempt to get young people coding, with changes to the national curriculum. ICT was replaced by a new “computing” curriculum including coding lessons for children as young as five. This curriculum change plays directly into the complaints of technology companies that the UK has not been producing enough graduates qualified to fill vacancies. Microsoft and Google, along with BCS and the Royal Academy of Engineering were all involved in the new curriculum. They want young people to become ‘creative’ developers. 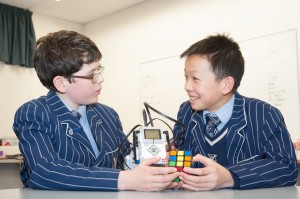 According to Dredge (2014, p.1), Code Academy’s Chief Executive Zach Sims stated, “What’s going on in the UK is unprecedented. It hasn’t happened in any other G8 or major economy: forcing an entire country to learn programming. The results will be pretty extraordinary. You’ll solve a couple of problems pretty much immediately: the IT skills gap and, hopefully, the gender gap in technology. And hopefully, you’ll raise a more digitally literate generation”.

Coding is noted as the most important job skill of the future, with recent revelations stating that half of all programming openings will be within industries outside of technology such as healthcare. Computational thinking has been identified as a fundamental literacy of the 21st century (Chalmers and Watts, 2014). St Andrews College is on board and sailing – a large ocean to navigate!

Preparatory School – a focus on their Robotics Programme

The Preparatory School Robotics Programme sees students building and programming robotic devices to help them make sense of the dimensions of light, sound and motion. At the same time, the course places an exciting and highly-engaging new spin on core learning areas such as Maths, Literacy, Science and Social Studies. Students use the Lego ‘Mindstorms’ robot construction system to devise solutions to specific technological challenges. The system includes planned projects that can be built, but also allows participants to bring their own ideas to life. Light, sound and motion sensors invite students to think carefully and creatively about how their robot might function and what tasks it might perform.

This year saw a step up in the Preparatory School Robotics Programme. Thirteen new EV3 Lego Mindstorm robots were purchased with financial assistance from the PTA, replacing the older NXT version. A Year 5 lunchtime club was established in Terms 1 and 2, focusing on weekly challenges. The club was made up of 15 students, 4 girls and 11 boys. During Term 3, a Robotics Inquiry was run with Year 7 focusing on moving, coding, using ultra sonic sensors and team work.

In August, five teams performed in RoboCup Junior NZ. RoboCup Junior NZ is a national robotics competition for school children. RCJNZ is a unique event that excites and motivates students. Created in a true cooperative spirit, the RoboCup Junior Educational Competition encompasses not only engineering and IT skills, but extends right across the school curriculum. Also during Term 3 and 4 an after school club was established for Years 6-8. Twenty students belonged to this club which was run by two Mechatronics students from the University of Canterbury.

The Preparatory School also purchased 6 Bee-Bots to be used by Junior Department students. Bee-Bots are an award winning programmable floor robot. The Bee-Bot has a simple and child friendly layout and is the perfect starting point for teaching control, directional language and programming to young children. The Bee-Bots were used this year by Year 2 students who work collaboratively alongside Year 7 students completing and creating simple mazes based around fairy tales.

At the end of the year, 12 ‘mBots’ were also purchased and added to the robotics programme. mBots will be used at the Year 4/5 level and are an all-in-one solution for students to enjoy the hands-on experience based around programming, electronics, and robotics. mBots use mBlock programming inspired by Scratch 2.0, and are controlled by wireless modules.

It is easy to introduce an engaging tool like robotics to students. What is more difficult, and what we are much more interested in celebrating, is when a teacher can take that tool, and create a series of lessons which authentically integrate that particular technology into the curriculum.

Ellen Hampson is the GATE Coordinator at St Andrews College Secondary School. Ellen’s academic studies have taken her to ‘far off’ places such as Antarctica. Ellen commenced a PhD investigating Antarctic ice utilization in 2006. Currently on hold, it is Ellen’s aim to recommence doctoral studies in 2017 with an amended focus to climate change communication within education.

Kelly McBride is Head of Learning Enrichment and a Year 7 Teacher at St. Andrew’s College Preparatory School, Christchurch. Kelly is responsible for the provision of appropriate curriculum enrichment activities and co-ordinates a number of Gifted and Talented programmes including Robotics, Future Problem Solving and Writing Enrichment