This is a Guest Post from our Head of the Music Department Mr Duncan Ferguson who is also an Apple Distinguished Educator for 2015. He has posted here before about the integration of technology and music as well as project based learning approaches in Music. You can read the original post here.

Last year I was lucky enough to be granted the Head of Independent Schools Scholarship Trust award. This enabled me to travel to San Francisco and NYC to study how Music Technology is successfully being incorporated into high schools.

As a result of this study I have produced a document called The Music Educators Technology Survival Guide. This is a free download and takes you through recommended equipment required to setup up a music technology programme in your high school. It also provides an overview of the requirements for the NZQA Unit Standards, which you may use to assess your students’ music technology skills.

However, it’s one thing to have all the gear for teaching music technology but I’ve found the physical makeup of your studio/recording/mixing spaces, are critical to student success.

Of course, the quality of the acoustics in your recording space(s) is one of the most important factors but unless you’re involved in a new build of your department there may not be a huge amount you can do (whatever you do, don’t put egg cartons on your walls, they will only make things worse!).

But if you are lucky enough to plan a new setup this is what I recommend you aim for when you’re trying to record a rock band. 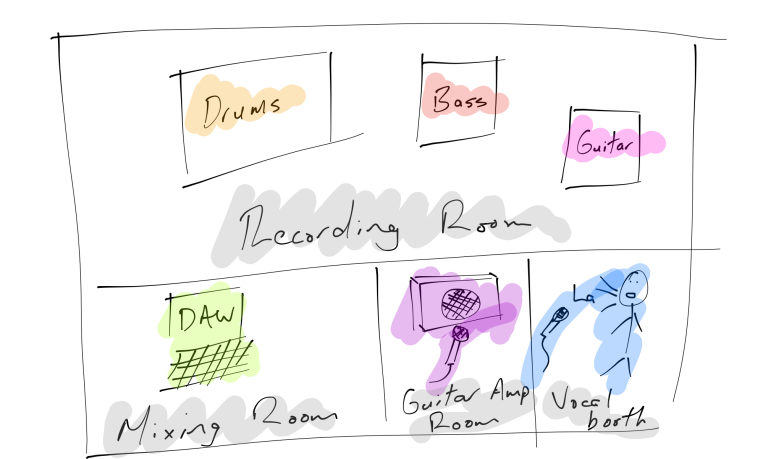 Some important things to note:

Why does this setup work so well?

Generally high schools students are not going to be good enough to record to a click track and retain a good feel, and they’re also not great at overdubbing instruments one by one. So this setup allows them to play all together as they would in a normal rehearsal room, hopefully creating a great groove.

But with our multi-room setup (i.e. having an amp room) we are able to record each instrument on to isolated tracks in our DAW so if one musician makes a minor mistake you don’t have to stop the take as you would if you had the amps in the same rooms as the drum microphones. Any minor mistakes can be cut out and re-recorded (or inserted from another take) just by the musician that made the mistake, without forcing the whole band to do another take.

Having all instruments on isolated tracks (without any ‘bleed’ from the other instruments in their tracks) allows us to fix timing and pitch issues with software like Celemony Melodyne.

On a recent session the bass player had huge trouble locking in with the drums. If the band had recorded to a click track it would be easy to ‘quantize’ the bass audio to the grid but as I said before, most high school bands aren’t good enough to be able to record to click well.

But using the new version of Melodyne 4 you are easily able to generate a ‘tempo map’ of the performance (most likely using the drum kit as your timing reference) which you can then quantize the bass to, making the two musicians perfectly in time with each other (even though they didn’t record to a click). I’ll do a full review of this software and walk through this process in a future blog.

If you want hands on, practical help with understanding how to create a recording setup like this I’m running workshops for teachers – Learning Ideas Teacher Training.

1 thought on “Guest Post: The Ideal Setup For A School Recording Studio”