This is a guest post written by three Year 8 students from the Preparatory School: Imogen, Archie and Marshall.

Last week, twenty students from Year 8 were part of an Arduino day run by FutureInTech. Arduinos are open source microcontrollers that can be programmed to do various things. The fact that they are open source means that anyone can use the software and hardware for whatever they want, as long as they follow the license.

There were five tutors from Airways, Dynamic Controls, Allied Telesis and Meridian Energy: a computer scientist between four, working in pairs. We took turns programming and plugging into the microcontroller. Our first project was to make a LED flash. From that, we progressed to making the LED flash at different speeds, using a button to make the LED flash, and connecting a buzzer. In the end, some of us had managed to make a doorbell: when you pressed a button, a LED would light up, the buzzer would go, and on the screen would appear “Someone’s at the door!”

Overall, we had plenty of fun on the day and learnt some new skills. We would definitely like to do something like it again if we had the chance. 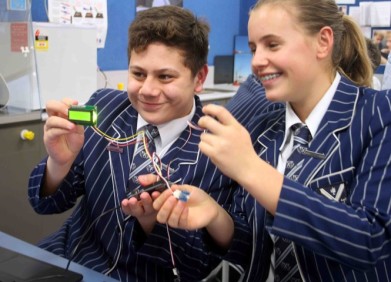