This post was originally written for publication at the official Microsoft OneNote In Education blog.

2014 was a year that saw significant increases in usage of Microsoft OneNote at St Andrew’s College and there were a number of factors that contributed to this, including:

Whilst the above reasons have all contributed to increased usage of OneNote amongst staff and students I believe that one of the biggest reasons for the success of OneNote is the interface. The layout is reminiscent of a traditional ring binder folder with coloured tabs that all students and teachers can relate to. Additionally, the “blank canvas” approach to the notebooks means users are not confined to dimensions of a page and can arrange content, text, images, hyperlinks and comments anywhere they choose. This freedom is appealing, whilst still being supported by optional page templates and the ability to insert lists, to-do items and other organisational elements. As Mrs Yoder noted for her English students:

“I didn’t want a place just for storing documents. I wanted kids to interact, not to struggle to use their devices, and to have a ring binder in the sky.”

Curriculum Areas Where OneNote Is Being Used:

St Andrew’s College is the equivalent of a K12 school and one of the most pleasing aspects of the Office365 deployment has been the uptake amongst our Preparatory School. Whilst this has mostly been in the Years 5-8 classes (students aged approximately 9-12yrs old), some of the usage has been incredible. Below is some examples of OneNote usage across the school in different curriculum areas: 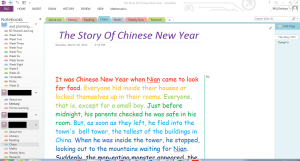 Mr Wilj Dekkers joined the College in 2013 and immediately embraced the benefits of using OneNote with his Year 6 students both in class and also for their home learning (homework). I was talking to some of his students in late November after nearly a year of using OneNote and their ease and confidence in using the programme was evident. A student called Hamish commented:

OneNote is really good because we can all go on it at the same time – we have even done debates on it!

Another called Izzy noted that whilst the other Year 6 classes were using traditional exercise books for their home learning, they weren’t:

We have not done one piece of home learning in a book all year – it has all been completed in OneNote.

Mr Dekkers did take time to help the students setup an individual OneNote notebook at the start of the year which they then shared with him. He could then see all students’ notebooks and his planning directly within OneNote on his computer. 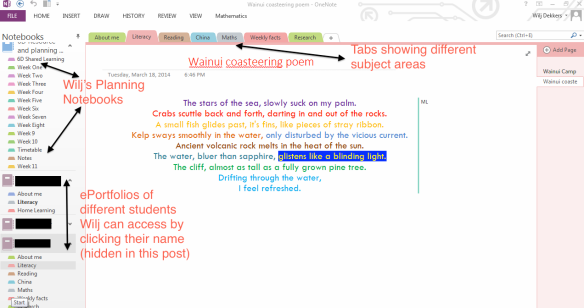 With the platform in place, students were then able to use OneNote as a planning and collaboration tool in a variety of different learning areas such as writing “choose your own ending” stories within OneNote. Below is a video showing a student reading his story and also navigating through a virtual world in MInecraft he created based off his OneNote writing:

You can read the stories they wrote directly in OneNote Online since they shared them with guest access – Desert of Terror, The Black Death Maze and Island Adventure. There was a strong focus on effective editing throughout the creation of these stories, with students using the highlight feature in OneNote to indicate passages they had reworked (often through visually “seeing” their world they had created in Minecraft). Similarly, students were encouraged to share their drafts with their classmates so they could receive feedback and suggestions on the development of their stories.

Another usage of OneNote by students in Mr Dekkers’ class was during an inquiry learning project on Kiwiana – features that are unique to New Zealand. Again, there was significant usage of a range of features offererd within OneNote:

What impressed me so much about their use of OneNote was:

To watch a video of the students sharing their Kiwiana Minecraft world and reading their presentation from OneNote on an iPad click here.

Corrections and comments on student work via OneNote

In many ways, the English Department have been leaders in OneNote usage at the College, with a number of teachers tightly integrating it into their classroom teaching. The Rector of St Andrew’s, Mrs Christine Leighton, commented that it is exciting to see how teachers at the College are embracing opportunities through e-Learning.

“Teacher voices are really powerful and to be able to share that voice with other teachers, as well as parents and greater numbers of students is very effective. Teaching is not staying enclosed in a classroom.”

It is precisely in these areas of collaboration and sharing that OneNote excels, with Mrs Yoder saying It started as a way to help her students organise their notes, but she quickly found that Microsoft’s OneNote had a lot more potential.

“It has an extensive collaborative capability which allows students access to all my folders, and lets me see their work … My two English classes don’t have books they only use OneNote – that’s their method of storing all of their work and assessments.”

She also does all her marking online making her classroom effectively paperless.

“The students hand in nothing. I do a lot of colour coding in my feedback so they get back a far more visually enhanced assignment. I am also experimenting with oral feedback.”

This involves inserting a video into her feedback providing a medium for more detailed analysis. It’s a different way of marking and works for students who struggle with English and find it difficult to read a marking schedule. For her work with OneNote, Mrs Yoder was named a Microsoft New Zealand Innovative Educator (along with Mr Ben Hilliam from the Maths Department) and in the following audio clip she explains how OneNote has helped her students:

Another teacher in the English Department making extensive use of OneNote is Dr Jeni Curtis who set herself a goal with her Year 9 students in 2014 to be completely paperless by using a combination of OneNote and Moodle. She found that through using OneNote her students’ engagement and enthusiasm for writing actually increased.  Her use of recording video and audio comments directly into the notebooks of the students was particularly well received, especially from parents with one taking the time to send her the following the feedback:

I must congratulate you with using OneNote for marking the children’s writing. Callum showed me the video clip commenting on one of his assignments. It was really impressive and useful. It is such a great use of technology and had helped Wayne and I appreciate the use of technology in classroom environment … I have seen [Callum’s] shifts of interests from not liking writing to enjoying writing in the last 2 assignments, which is wonderful.

As any teacher will confirm, receiving unsolicited feedback like this from parents is both rare and extremely gratifying and was a great encouragement at the beginning of the year for Dr Curtis to progress with her “paperless classroom” goal.

A student reviewing the MS OneNote content recorded moments earlier by Mr Hilliam, and then practicing in his exercise book.

A number of teachers in the Maths Department were part of a trial group using Microsoft Surface Pro devices in the classroom, with a setup of the Pro, OneNote, Office Mix and also Miracast supported projectors. This led to some exciting teaching and learning where the flexibility of OneNote and the naturalness of “writing” on a tablet combined. Mr Ben Hilliam used a maths page template to teach graphing to his Year 9 Students, recording it with Office Mix and then embedding the link into a shared class OneNote notebook:

Outlined in detail in this blog post, it was evident that all students were benefiting from the example work from Mr Hilliam, as they no longer had to manually copy it into their books or photograph the whiteboard with the notes made in class – they were automatically synchronised into OneNote notebook. Additionally, if they had not understood the explanation the first time, they could simply watch the video again and hear the explanation and, crucially, see the problem being solved in OneNote.

Another use of OneNote within the Maths Department has been implemented by new Head of Department, Mr Dean McKenzie. Departmental meeting agendas are now written within OneNote and shared with all staff members prior to meetings, and then the minutes are recorded during the meeting for all to see. Furthermore, a move towards year level planning within OneNote is happening.

With all Year 9 2014 students being required to bring a laptop to each class, the opportunity to digitize the traditional handouts in the Religious Education programme presented itself and a number of the units used OneNote to achieve this.

The first unit was the Case of the Vanishing Corpse where students needed to compile a dossier on the person of Jesus. Traditionally, this was paper based and prone to students losing “evidence” or forgetting to bring it to class. By making this into a OneNote notebook there was no way students could lose it, and the teacher could see the contents at any time:

The last unit of the year was turned into an inquiry project with OneNote forming the shared document the groups would collate their information into. You can view the template NoteBook by clicking on this link and the benefit of this approach meant that students could create task lists, write reflections on what they had achieved that lesson and what they needed to do next lesson, as well as centrally store the information they had researched:

Example information with hyperlink to source

Whilst only in the first year of introduction within the Religious Education department, a number of staff did use these notebooks with their students and the likelihood is this will continue in 2015, particularly with the ease of distributing template notebooks now with the Class NoteBook Creator released late in 2014. Similarly, the Science Department is also planning to use OneNote notebooks to digitally release all class handouts to students in Year 9 in 2015.

The use of OneNote is now becoming commonplace at St Andrew’s College and for good reason. It’s natural interface and storage in the Office365 Cloud (all notebooks are stored and synchronised via OneDrive For Business) makes it an easy solution for students and staff to collaborate and see progress towards learning outcomes.

Undoubtedly 2015 will bring new opportunities to innovate with OneNote both in and out of the classrooms.