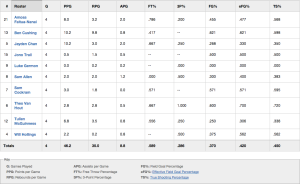 I am currently with the St Andrew’s College Senior Boys Basketball team in the USA, playing in the Corona Del Mar High School annual Beach Bash tournament. It has been a big learning curve for the team coming up against some very high quality teams from around Orange County. Although we have not played them, the tournament includes the #12 ranked high school basketball team in the USA, Mater Dei (who interestingly also use GameChanger to record stats).

As part of my role with the team, I have been taking statistics during each game on an iPad, recording important information such as:

I’ve used a number of different apps over the last two years to record this information but have settled on GameChanger has it provides a really good overview during the game revealing three critical stats:

This is the overview for the last game we played against Sage Hill:

White is St Andrew’s College and Green is Sage Hill

Aside from the first quarter, this ended up being a very close game, with the difference really coming down to the very high percentage Sage Hill managed to shoot the three pointer.

Shot zone for Ben, our starting centre. As you’d expect for a centre, most of the shots are close to the hoop.

One of the other great benefits of this app is that parents and supporters who are not at the game can follow along live online or via an iOS app with the GameStream feature, and also get game and season statistics for each player. From a coaching perspective, it is invaluable to be able to show each player where their shots were made/missed, allowing them to reflect on what were high percentage shots to keep taking, versus lower percentage shots to try and eliminate. Two other useful features are the shot chart for the game and the Game Flow (similar to the “worm” in a cricket run chase). Below are the Game Flow and Shot Chart for the last game against Sage Hill:

A unique feature of this app is the “Recap Story” automatically written after the game is completed based on the statistical data recorded. On Thursday the St Andrew’s team beat local team Westminister and this is the write up generated by GameChanger:

These Recap Stories are written via technology by Narrative Science and present a succinct summary of the game. My only request would be that these recaps also reflected some of the performance of the opposition, rather than being so obviously focused on the team recording the stats.

Whilst the GameChanger app is not perfect (it is missing some useful stats such as +/- and EFF), it is very intuitive to use and provides the best “in game” reporting at a glance making it very valuable. The GameStream feature, streaming in realtime the scoring of the game, is a great feature as well.

This blog post is a little different from the usual eLearning stories that I write about, however I find it really interesting that technology like this is now available at a high school level, whereas it was previously only accessible at a College or Professional levels. It reinforces that technology is helping learning across all spectrums, both in the classroom, as well as the sports environment.

This post was written by a student in Year 6SD after a Mystery Skype session in Term 4.

On November 21st 6SD was involved in a mystery skype with another Year 6 class.

As soon as they spoke we knew that they were in America, so we had to guess what State they were in. To make it more interesting and more challenging, we were only to ask yes, no questions. We were allowed to use our devices to check information and it didn’t take long for us to ask if their State had a starting letter between A and L.  We asked if their capital city was Montgomery and they replied yes. We found out on our devices that they were in Alabama.  Ben played on his electric guitar, Sweet home Alabama and they told us we were right!

They found out we were in New Zealand. After we both knew what Country/City each other was in, we asked them questions about Alabama, like what their favourite sports teams were. We found out some very cool facts about Alabama like that they get to wear mufti every day while we had to wear uniforms all the time and also that at 9.10am on Friday morning it was only 2.10pm on Thursday for them.

Overall it was a great experience and we would love to do it again.