In late 2012, Blake Morgan (2013’s Student Head of Television and Media) dreamed big. Having seen other organisations promoting themselves through lip dup videos, he pondered whether St Andrew’s College could do the same. After some initial planning of a possible route around the campus and identifying some potential songs, the project was shelved until 2013 because of time constraints.

From this initial planning however, some important realisations were made, notably that the size of the campus made it too difficult to complete the whole shoot in a single shot. Consequently, the decision was made to split the filming into three separate sections which would make the process logistically easier. The College had developed a promotional video in 2012 called “Feel the Spirit” and Blake was keen to create a new video that was designed and influenced more by students.

At the outset, Blake had a clear and somewhat ambitious goal: exceed the ~5,000 views of the “Feel the Spirit” video, and the resulting “This is Us” lip dub achieved that within a few months, currently sitting at ~14,000 views at the time of writing:

This amazing project did not just miraculously fall into place and significant planning and communication from Blake and his team contributed to this successful outcome.

END_OF_DOCUMENT_TOKEN_TO_BE_REPLACED 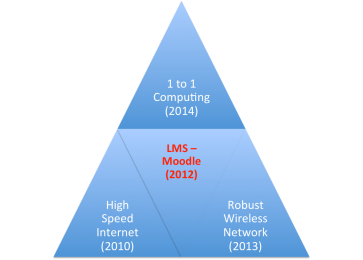 Earlier this year I was asked to speak at the Interface Magazine Expo 2013 and share some of the eLearning journey of St Andrew’s College.  As I prepared my presentation I reflected on some of the essential building blocks that have been put in place over the last few years, from which we can launch into our 1:1 Computing Programme in 2014.

The Government has been very public in their aim to install Ultrafast Broadband in Schools, and is currently rolling this out as part of their Schools Network Upgrade Project (SNUP). However, as an Independent School, St Andrew’s has had to largely implement this ourselves, partnering with Snap Internet who deliver the internet via fibre optics from Enable Networks.

Not only does this allow our students to ‘surf the net’ at very high speed, accessing rich media content such as Educational TV and video-conferencing with other classrooms, we are also using this fibre backbone to perform off site backups in partnership with another school.

Noticeable are the peaks and troughs associated with the end of each lesson and lunch breaks.